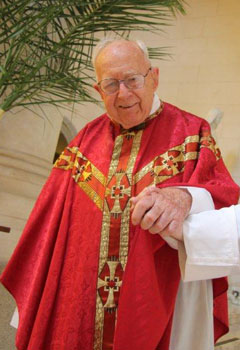 Through this sacred liturgy, the Church marks the completion of the earthly pilgrimage of Father Donal Roe O’Neill, Pastor Emeritus, of the Diocese of Sandhurst.  This life of faith commenced on the 3rd February, 1924 in Broken Hill, NSW.  Don was one of the four children of Daniel Roe O’Neill and Nora, née Horan. He had a brother Jim and two sisters, Jim and Mary (Mrs O’Halloran) are both deceased.  Margaret Mary, Sister Veronica of the Sisters of Mercy is the remaining member of the family. Jim’s son, Greg is with us today with his wife Judy.  Mary’s three children were unable to join us due to overseas travel and commitments.  To Sister Veronica, Greg and Judy and the other members of the O’Neill Family, we offer our sincere sympathy, assurance of our prayers and our gratitude for sharing their brother and uncle with the Church, as a priest of this Diocese for more than sixty seven years.

It would be simple to consider the life of Father Don from the prospective of the last few years of his long life and dismiss the significance of his life in terms of that of an old man.  However, in order to appreciate this life we need to journey back to Broken Hill and 1924.  Don was born midway between the conclusion of the First World War (1914-1918) and the onset of the Economic Depression (1929-1933) in the mining town of Broken Hill, we can appreciate the challenges to the O’Neill family.  The Depression brought its hardships to families and individuals across Australia, but in a mining town dependent on exporting its silver, lead and zinc, the impact was severe.  Daniel O’Neill worked as an accountant for one of the mining companies.  Don, on looking back on his early life acknowledged his deep love of his family and his parents loving care of their children.  In later life, he attributed this experience of a loving family life as a significant contributing factor to his vocation to the priesthood and of his sister, Margaret Mary’s vocation to Religious Life.

Don completed his schooling and entered Corpus Christi College, Werribee to pursue his vocation to the Priesthood during the Second World War. He was accepted as a student for the Diocese of Sandhurst, by the third Bishop, the Most Reverend John McCarthy.  He was ordained as a priest here in what was then only the partially completed Cathedral, on the 25th July, 1948 by Bishop Bernard Stewart who was at the time, the co-adjutor Bishop.  He served as Assistant Priest in the parishes of Wangaratta; St Kilian’s Bendigo; Tallangatta; Benalla; Beechworth and Shepparton.  And then as Parish Priest in the parishes of Elmore; Myrtleford; Euroa and Golden Square.  Due to his deteriorating health he retired at Easter 1994.  Following retirement he lived until 2012 in one of our units in Bailes Street, Bendigo and then when his care needs required it, he moved to Bethlehem Aged Care for his remaining years.  Both his parents spent their last days at Bethlehem for which Father Don was very grateful.  He himself described his time at Bethlehem as some of the happiest days of his life.

As a parish priest, Father Don was always concerned for the good functioning of the parish, the good order of the parish plant and the pastoral care of his parishioners, particularly in the significant moments such as baptisms, marriages and funerals.  Even in his failing years this pastoral concern would surface in his anxiety that he complete the preparation for baptisms and marriages he imagined that he was to celebrate.

In addition to these pastoral concerns, Father Don involved himself in two other areas: Ecumenism, as Chairman of the Diocesan Commission on Ecumenism, representing the Diocese in relations with other churches and as a chaplain to the Serra Club which is concerned with the promotion of vocations to the priesthood and religious life and support of seminarians, priests and religious.  As with all aspects of his priestly life, Father Don gave himself generously to these ministries and his participation in Ministers Fraternal groups in parishes where he served.  He is remembered by many for his chaplaincy to the youth group for the young women of the National Catholic Girls Movement.

In reflecting on this committed and generous life as a priest, we cannot but look at the underpinning of this vocation.  For this we need search no further than  to consider the three Scripture readings Father Don chose for his Funeral Mass.

The First Reading chosen from the Book of Wisdom with it message of hope brings consolation to each of us, as we are assured of the particular loving care of our God, even though those without openness to God might dismiss our faith as folly and our confidence in God’s loving care, as without foundation.  Keeping faith with God brings consolation, strength and union with God for eternity.

The Second Reading from the First Letter of St John echoes a similar message of God’s love and its fulfilment through our openness and acceptance of His love.

The Gospel account of the Last Judgment assures us that our response to God’s love by sharing that love, through our care for others, particularly those distressed or in need, draws us closer to God and a share in his eternal life.

These aspects drawn from the Scripture were not merely intellectual convictions that Father Don held, but were the underpinning of his life of faith and the source of strength for the living out of his priesthood.  These convictions were cherished within the context of Father Don’s relationship with his God, enriched through his constant prayer and the celebration of Mass.  His long life of faithful and unswerving commitment to the priesthood was nourished by his constant prayer and the celebration of the sacraments.

None of us could estimate the number of people touched by the life and ministry of Father Don, over more than sixty seven years of priestly ministry.  The occasions on which God reached through this priest, his faith and ministry to bring His love and salvation to a soul open to Him.  We know that thirst to serve his Lord and his love of his people, disposed Father Don to be God’s instrument in bringing God’s love and mercy to others.

In writing to Father Don accepting his resignation, Bishop Noel Daly wrote:
"You know that I deeply appreciate the magnificent work that you have done, not only in Golden Square, but in many other places.  There would be no Priest who works harder than you do.  I hope and pray that there will be still a number of things which you will be able to do and to be very much a part of the priestly body here in Bendigo."

The Bishop wrote further following a meeting of the College of Consultors:
"Your retirement was discussed last Friday at the Meeting of the Consultors and a good deal of acclaim was given to the very valuable service which you have offered to the Diocese and to people generally during 45 years of priesthood. It was also noted that, in your retirement, you will be living here in Bendigo and that, hopefully, there will be a good deal of happiness and liveliness left in the years ahead which God gives you."

With deep gratitude for the life and priestly ministry of Father Donal Roe O’Neill we pray that his soul, through the mercy of God, may rest in peace.  May his soul and the souls of all the faithful departed rest in peace. Amen.