The Funeral Mass for Fr Owen Doyle was at St Mary’s Church Greensborough last week. Priests from the Diocese of Sandhurst, Archdiocese of Melbourne and Bishop Emeritus Leslie Tomlinson, concelebrated the Mass with Bishop Shane Mackinlay.

Fr Owen Doyle’s son Jack spoke to the congregation: “We hope that what you will take from the eulogies is the recognition that Owen Doyle spent his whole life in the service of others – his family on the farm, his school, his country, his profession, his wife and children, the St. Mary’s Greensborough community, the Rushworth community, and finally the St Thomas community.”
Jack said he was grateful for the upbringing his father gave him “… As a father with very strong principles and morals, he set the bar pretty high and, while we might not have always reached his standards, he gave us the tools to aim there,” he said.

Jack thanked the people of Rushworth and surrounding areas for looking after his father so well over his 20 years as Parish Priest there.

Glen (Glenys) Avard, former parishioner, friend and self-proclaimed “old typist” read a letter which she had recently written to Fr Doyle:“You watched over us gladly, because God wanted it …
Your years working with us in Rushwoth were so inclusive. Anybody who put their hand up to help in the parish, you made them feel part of the team."

“I want to thank you Owen, for your time spent in service, friendship and care; of not just your parishioners of St Mary’s, but the very many people: Waranga news workers, bowlers, Pies supporters, neighbours, ecumenical communities, who were chuffed to be one of your friends.”

Fr Mick said that Fr Owen was dedicated to all of his parishioners and that “Nothing would deter him from giving his parishioners every opportunity to live out their faith.” He would celebrate four Masses at four separate churches every weekend and was always striving to find ways to better serve his flock.

“He took up his appointment at Rushworth nearly overnight. He was the right priest at the right time. His wisdom of years, his years of teaching, people skills, his prayer life and humble yet firm approach was needed at the parish at that time,” said Fr Morley.

“The way he went about building up the trust greatly won him the support, the confidence and the endearment, not only of the parishioners, but also of the town.”
He was a humble man who lived humbly in the Lord by serving and loving people.

In his Homily, Fr Rom Hayes agreed with this sentiment, saying that Fr Owen was “essentially a humble man, in the best sense … his heart was with the battler.”

“I was in awe and admiration of him always. He served with unwavering fidelity to his people,” said Fr Rom. “Owen was always asking how he could serve his people better. His great concern was to be the best servant possible for his people.”

“Since Owen himself chose these readings for today we should be able to catch a glimpse of him in the readings themselves. I’m sure that Owen spent many a day in his life as a priest reflecting on the readings we’ve just heard.

He would have smiled knowingly at the words of wisdom*: ‘Length of days is not what makes age honourable, but the honourable one has faith in God and faithfulness to his people.’
In the second Reading**, we’ve learned that Owen didn’t care much for his earthly tent.”

“We’d sometimes ask him, why he decided at the ripe age of 60 plus to take on priesthood ... He could never give us a simple clear answer as to why. But we think it was a faith question. Not something worked out so much in his head, but in his heart. And as the second Reading says so beautifully, he lived by faith rather than by sight.”

I ask myself: Why did he include the third Reading [The Beatitudes (Matthew 5:1-12)]? “Yes, it’s the beatitudes, it’s the Gospel and yes, it’s the promises made by Jesus to all of us; the promise of life in the Kingdom … I would like to say, also, that I reckon Owen knew within himself, the happiness, the blessedness, of those beatitudes. That he found in them the fulness of life. It’s paradoxical. But that is the truth and I’m sure that that is what Owen would want us to be reflecting on this day, as we say our farewell. The Readings were chosen with intention, and that is that we would take them to heart, and that we would know that, yes, the beatitudes are the way to the fulness of life and, of course, life with our God.”

Fr Owen was the oldest priest in Victoria and the second oldest in Australia. He is survived by seven of his nine children, 24 grandchildren  (soon to be 25) and 24 great-grandchildren. 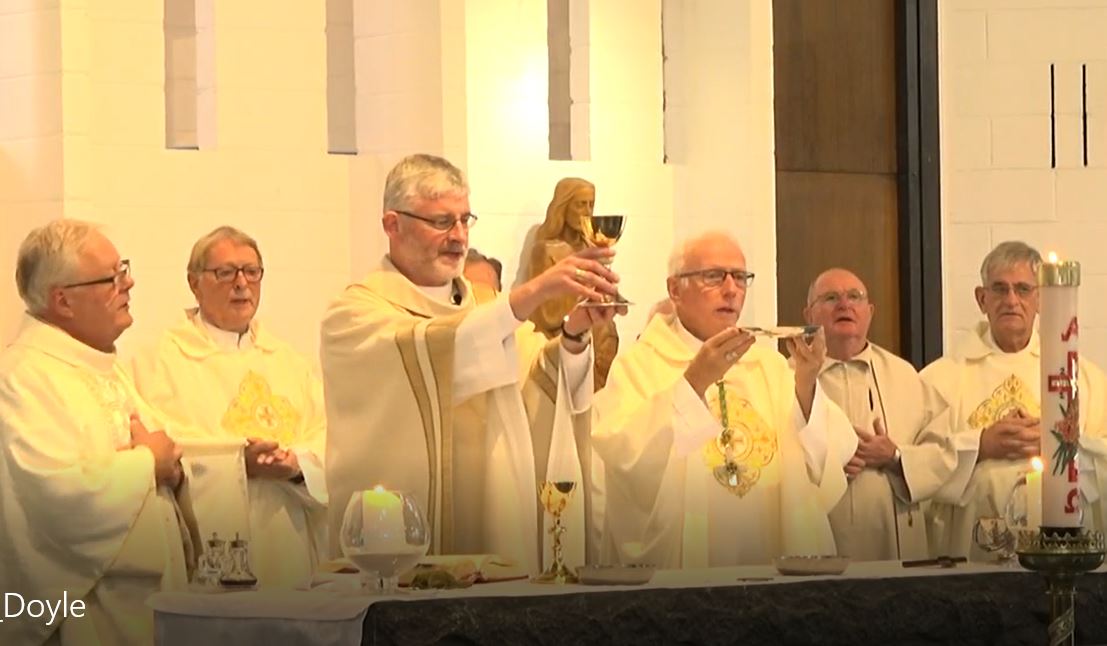