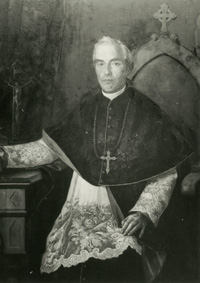 After being ordained a priest, Stephen Reville returned to Ireland and spent seven years in religious work in Dublin, and then, accompanied the late Dr Crane to Australia, where he was appointed Bishop of Sandhurst.  He reached Bendigo in 1875, and in March, 1885, he was consecrated Coadjutor Bishop of Sandhurst.  When Bishop Crane died in 1901, he was succeeded by Dr Reville.  He was held in high esteem by all sections of the community.

Stephen Reville O.S.A. was born in 1844 in Wexford, Ireland.  Educated at St Peter's College, Weford, he later entered the Rev Dr Furlong's Irish Augustine Novitate at Callan.  He pursued further studies in Ghent, Belgium, and at 23 graduated as a master in philosophyand theology.

On the 8th of September 1867 at the age of 23 he was ordained a priest of the order of St Augustine by Cardinal Cullen, a cousin.  One of the assistants of the ordination, Patrick Francis Moran, later became the CardinalArchbishop of Sydney, accompanied Dr Crane and Fr Stephen Reville later to Australia.  On the 27th of January, 1885, then 40 he was appointed both Coadjutor Bishop of Sandhurst, Australia and the Titular Bishop of Ceramus.  Later that same year on the 29th of March, 1885 he was ordained bishop.

In 1885 Stephen Reville O.S.A. was ordained as Coadjutor Bishop to Dr. Crane. For the next sixteen years he would bear a great deal of the responsibility of the Diocese of Sandhurst.  Finally, on the 21st of October 1901 he succeeded as Bishop of Sandhurst.

At the age of 72, on the 19th of September, 1916 Bishop Reville died from pneumonia, supervening on an attack of pleurisy, while still in office.  He was the last Augustian bishop of Victoria.  The diocese at this time extended over 22 parishes, 11 of which had convents and schools in them.