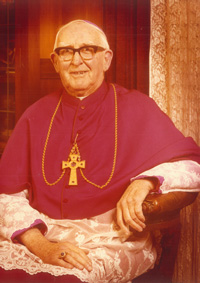 Bernard Denis Stewart was born at Essendon on August 4th, 1900.  The third of Ronald and Rosanne Stewart's 8 children, baptised in St Monica's church, Moonee Ponds and confirmed in 1910 with the name 'Joseph'.  He was educated at the Sisters of Charity's St. Columban's Essendon.  His father became ill with cancer and and he was nursed at home for 2 years before losing his battle in 1912.  This period often entailed going by tram into the city for medication.  Bishop Stewart recalled wearing hand-me-downs and acknowledged the help of the Sisters and Brothers who were very good to the family.  All the boys wages helped run the household. His brilliance shone early when he won a state scholarship to St. Joseph's Christian Brothers' College, North Melbourne where he was Dux for 2 years in succession.  At 19 years of age he wanted to join the Priesthood but was discouraged by the parish priest.

He was a good sportsman, especially football, swimming and tennis.  He played for Prahran in the VFL

He entered the Public Service in the Note Issue Branch of the Treasury while completing his studies.  He graduated at Melbourne University in arts (1920) and law (1922).

In 1923 he was admitted to practice as a Barrister and Solicitor of the Supreme Court of Victoria.  He practised at Hedderwick, Fookes and Alston to Mr R.L Wingrove where he stayed until 1926.

He completed his ecclesiastical studies at Propaganda College; Rome, where he was ordained in December, 1929, and where he gained his Doctor of Divinity degree in 1930.  As a priest he continued his love of sports where he became a shooter.  He was a good shot, kept dogs and went after quail.

On his return to Australia he had short appointments to North Fitzroy and then to West Footscray.  He was curate at Kyneton (1930-34), then followed Newport, and Footscray.  He was an early spiritual Director of the Catholic Evidence Guild and conducted Question Box and gave talks on 3AW's Catholic Hour.  Later he was appointed curate at Carlton(and later administrator (1939) and West Melbourne where he was appointed in 1942 as Administrator to Archbishop Simonds.

In October, 1939 Dr Stewart was appointed Senior Chaplain part-time to the Southern Command in Victoria.  This involved visiting training camps for periods of 1 - 3 months at Mount Martha and Balcombe and also looking after the troops at Broadmeadows.  Dr Stewart is remembered as conducting great work in representing the Catholic Community in patriotic activities.  He was a director of the Catholic Welfare Organisation.

On Febuary 11th, 1947 he was consecrated in the Sacred Heart Cathedral, Bendigo by Archbishop J.D.Simmons.  In April at a reception in the St Kilda Town Hall, sponsored by the Catholic Welfare Organisation, a presentation of a liturgical outfit and a Crozier were made in recognition of Bernard's work with Fr Maddotti for the Italian community.  Three years later while on ad limina for Bishop McCarthy he was contacted at Omaha, Nebraska with news the Bishop had died.  He succeeded to Sandhurst, 18th of August, 1950.

In 1977 he consecrated the Sacred Heart Cathedral following much effort to bring about the extension to it's present form.  He worked tirelessly to establish Bethlehem Home (where he died) and Mount Alvernia Hospital (now St John of God).  Many schools were established during this time.

He retired as the Fourth Bishop of Sandhurst in 1979 and was succeeded by Bishop Daly who was very kind to him and included him in many celebrations.

At 88 years of age the former Bishop died.  Around 1500 attended his requiem mass along with 15 Bishops and 180 priests.  Many of the clergy were in Europe following there regular ad limina visit to the vatican and could not be contacted soon enough.  It was a joyous requiem, the sadness of loss tempered by gratitude for Bishop Berard D Stewart's strong spiritual leadership for nearly half a century.