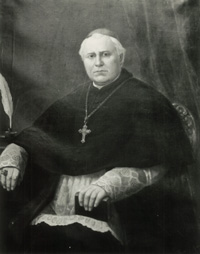 For the new See of Sandhurst, the Holy See first chose Fr. Fortune, President of All Hallows, but he begged to be excused on grounds of his feeble health; the next choice was Canon Maguire of Dublin but his excuses likewise were accepted. The third choice was Martin Crane, of the Order of St. Augustine. He accepted the burden without demur. He was born in 1818 in the county of Wexford, and studied at the Diocesan College, whence he proceeded to the novitiate of the Augustinian Order at Grantstown, near Cork; he completed his ecclesiastical studies at the house of S. Maria in Posterula in Rome, where we was ordained on 12 April 1841.On his return to Ireland he was appointed to parochial duties, and he soon showed that he could handle heavy responsibilities. He was twice chosen as Provincial by his brother Augustinians, and was instrumental in erecting one of the finest churches in Dublin, St Augustine's, in John Street. He is said to have expended 100,000 on this magnificent church, and had visited America several times on successful begging expeditions. While on one of these expeditions he was informed of his appointment to the new Victorian diocese.

Martin Crane O.S.A. was consecrated bishop in Dublin on 21 September 1874 by Cardinal Cullen, one of the assistants being Patrick Francis Moran, later Cardinal Archbishop of Sydney. He brought two priests with him to Australia, one of them being his cousin, Fr. Stephen Reville who would become his right hand, as the Vicar General, coadjutor, and successor. He was given an enthusiastic welcome to Sandhurst by all classes, and was installed wit due solemnity on 23 May 1875 by his brother Augustinian, Archbishop Goold.

In 1885 Stephen Reville O.S.A. was ordained as Coadjutor Bishop to Dr. Crane. For the next sixteen years he would bear a great deal of the responsibility of the Diocese of Sandhurst. Bishop Crane celebrated the silver jubilee of his episcopate in 1899. The celebration was subdued, because of his advanced age and infirmity, but very earnest. In 1901, the first completed portion of the Cathedral was opened; the grand occasion was too much for his enfeebled health, and as he left the sanctuary, he was heard to murmur: 'Nunc dimiffis serum tuum, Domine, in pace'. He died on 21 October, 1901.

In the panegryic, Archbishop Carr summed up his life in a series of questions:

“. . . has he not been chastened and purified during the last seventeen or eighteen years in the crucible of the greatest physical privation and pain to which human nature is liable, and has he not borne his great trial with the patience of a martyr and the resignation of a saints . . . Has he not been a founder and father of a great diocese, has he not watched over its early struggles, filled it with noble institutions, provided religious education for the children, the means of pursuing the higher spiritual life for those whom God has called to his special service, and ample opportunities of sanctification for all? . . .”

Excerpts from “A History of the Catholic Church in Victoria” by D F Bourke 1988.